In this article, I’ll present a real world case study, in which I brought a languishing series back to life with Facebook ads. By using these techniques, you’ll acquire the tools to build revenue and boost a series, even if your once-powerful series is flailing.

December can be a rough month for writers. With the holidays approaching, potential readers hold their purse strings close, saving for gifts and travel costs. Instead of borrowing books from Kindle Unlimited, people spend the month shopping for last second gifts, planning meals, and finalizing travel plans. Because of these drags, December can be among the slowest months of the year for Kindle sales and page reads.

In December 2021, I realized something was wrong. My revenue was on pace to fall 20 to 30 percent below my summer and autumn numbers. But it was more than the December blahs. November had also felt slow, though not so slow that I panicked.

I turned to Book Report, my go-to tool for analyzing page reads and book sales. Although sales were seasonally slow across the board, my Darkwater Cove series stood out for its poor performance. The series was dying. I needed to right the ship.

The Decline of a Series

I published Darkwater Cove in January 2020, the first book in a six-thriller series that culminated in Don’t Breathe, which released in October of the same year. The Darkwater Cove series surpassed my popular Scarlett Bell series and built a loyal readership and fanbase. Monthly KDP revenue for the series climbed from $6000 in early January 2021 to over $11000 in August.

Then the problems began.

The first harbinger of future problems arose in late-summer. Conversion rates (the number of orders per click) degraded, prompting me to pull back on ad cost. At the same time, Amazon contacted me and graciously offered to include the first Darkwater Cove novel in the Prime Reading program. Under this program, Amazon Prime members can read the first Darkwater Cove book for free, without subscribing to Kindle Unlimited. The idea was to expose my series entry to a huge number of readers, ostensibly boosting sales and page reads for the next books in the series.

It didn’t work out.

As displayed in this chart generated by Book Report, revenue for the Darkwater Cove series fell for all three months during its Prime Reading run, bottoming out at 39% below the August peak. Don’t get me wrong. I would never sneeze at a series generating over $6000 in revenue per month, as Darkwater Cove did in November. But clearly I’d left money on the table.

In late-December 2021, I downloaded my archived AMS clicks and orders data into Microsoft Excel and created a conversion rate column (clicks divided by orders). Then I sorted every archived keyword and focused only on keywords which had a conversion rate of 20 or less. In other words, these keywords needed twenty clicks or less to convert into an order. I entered these high-performing keywords into a new AMS ad campaign and set my bids at $0.80 per click. I knew that if received at least one sale every 20 to 30 clicks on the keywords in my new list, I’d easily profit, even bidding high.

I find AMS ads are far more effective than Facebook Ads. However, a successful Facebook Ad can increase downloads by one to four per day, even on a daily budget of $30 or less.

I studied my Facebook Ads dashboard, picking the most profitable ads for my Darkwater Cove series over the last two years. I noted the best targets (usually authors) and the best performing images, videos, and ad copy. Then I restarted those ads, focusing on the best of the best: targets, images, ad copy.

Every day, I measured the results and continued building on my successful ads.

To increase monthly KDP revenue for Darkwater Cove from $1300 to $2400, near its peak in late-summer 2021. I already knew how much the series would earn if I raised sales of book one. Remember, long-term statistics tell us how many books in a series we’ll sell on average per sale of book one, and how many pages Kindle Unlimited subscribers will read after reading our first book.

Keep in mind, it takes one to three months for those revenue numbers to flow through every book in the series. Remain patient. Trust your data.

A Series Rises from the Ashes

AMS advertising, my bread and butter promotional tool, proved a difficult nut to crack. I struggled to generate impressions for Darkwater Cove, even bidding 80 cents per click. Keyword targets that once proved highly profitable failed to convert.

But one thing I’ve learned after several years of advertising is you only need one or two successful ads to build a middling book into a juggernaut. And while my AMS advertisements floundered, the Facebook advertisements took off like rocket ships.

Using Facebook’s advertising platform, I tested five targets for Darkwater Cove–three authors and two television programs. Three targets delivered poor results. Two targets returned over 40 percent on investment, meaning I earned fourteen dollars for every ten I spent. After killing the nonperforming advertisements, I increased the budgets for my profitable advertisements by around 20 percent every two days, until I was spending $30 to $50 per day on each advertisement.

My most successful Facebook ad included a short, hooky description to generate interest. I tacked on several reviews from happy Amazon readers. The ad links directly to the book’s Amazon page. 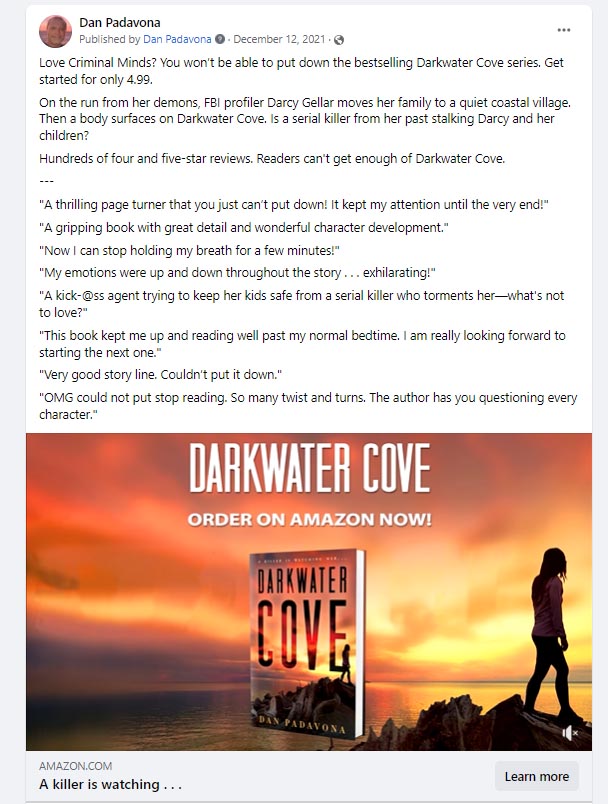 Not only did this Facebook advertisement sell more copies of Darkwater Cove in a week than my AMS advertisements had all month, I gained dozens of new followers on my Facebook author page.

The results were astounding. Darkwater Cove shot up the charts, reaching a paid rank of #7700 by January 9. Series readthrough increased as anticipated.

By January 15, the book ascended to #5500 on Amazon, #24 in United States Horror. As expected, the second book in the series responded, jumping into the United States Horror top-50 on the same day. My series was back, and all it took were a few good Facebook ads to stoke the fires of Amazon’s recommendation engine.

No matter how far your backlist falls, you can revive any book with targeted advertising.