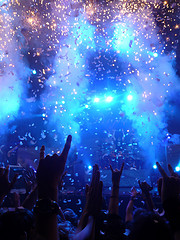 The crossover between fans of horror fiction and heavy metal music is significant and always will be. The same rush that one gets from the suspenseful passages of Stephen King’s IT can also be experienced in a dark riff. The same rebellious energy which drives us to raise the horns also seeks the escapist thrill of Dean Koontz’s Intensity.

From time to time I’ll make suggestions for hard rock bands worth checking out. One of my favorite bands is Finland’s Nightwish, a symphonic heavy metal band which employed heavy doses of opera during the Tarja Turunen era. Here Nightwish performs a killer version of The Phantom of the Opera, from the End of an Era DVD.

Check out Turunen’s epic vocal range. Her voice is nothing short of mind-blowing from 3:45 to 4:25.

As Nightwish has proved since 1996, heavy metal music can be beautiful and powerful simultaneously. Technically, I can’t think of too many bands who sound this tight onstage.

After this concert, Nightwish fired Turunen, blaming Tarja and her manager/husband for causing an unrepairable rift in the band. Where have I heard this story before? As you might guess, Turunen has her own side of the story. So this DVD truly is an End of an Era. Whenever I watch it, I can’t help but interpret the facial expressions of the other band members who plan to fire Tarja after the show.

Nightwish is still one of the biggest metal attractions in all of Europe, while Turunen has experienced success as a solo artist. Neither have since approached the magic they created as a combined entity. Doesn’t it seem that all of the best bands break up?

One of my greatest musical regrets is never seeing Nightwish live with Tarja Turunen. While I have high hopes that new vocalist Floor Jansen will bring Nightwish to heights not seen since the Once album, there is only one Tarja Turunen. Nobody is irreplaceable, but she comes darn close. I am envious of anyone who saw them together onstage. We likely never will again.