I’m often asked what I remember of the early days of my father’s musical career and what my favorite Dio-based band was.

Though I love and appreciate the power of Black Sabbath (the all-time kings of heavy metal, in my opinion) and the sheer energy of Dio albums like Holy Diver and Last in Line, Rainbow has always been for me, and probably always will be, the epitome of what a rock and roll band should be.

Photographer and graphic designer Scott Braun shared with me this amazing bit of nostaglia – the Rainbow spread from summer of 1976 in Circus Magazine, coincident with the release of Rainbow’s second album, Rainbow Rising. The magazine cover, which features King Kong atop the World Trade Center buildings, is permanently etched in my memory, for I must have read this article a hundred times at the ripe age of eight. This was when I began to realize my father wasn’t just a musician who wrote songs and played in band. He had become a bonafide star. A rising star.

Whereas Ritchie Blackmore’s Rainbow was a hugely successful introduction to the band’s innovative sound – traditional hard rock interspersed with Renaissance era melodies, it was Rainbow Rising that saw the band’s sound perfected. Rising stands today as one of the greatest achievements in album rock history – a sound that is unmistakable and an album on which every track holds its own. 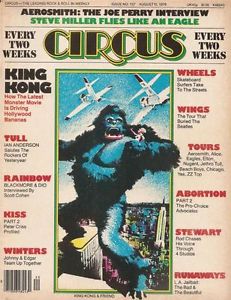 Rainbow Rising peaked at #48 on the Billboard charts (#6 in the UK), but perhaps its greatest achievement is in its undeniable longevity. The album still sells, at times better than the more commercial post-Dio hits Rainbow became famous (or infamous) for. Rising was remastered in 2011 and released as a double album with Down to Earth.

I still hear Rainbow Rising in the oddest of places. Tarot Woman, which begins with an invigorating build from abstract synth into a powerful medium-tempo rocker, was utilized last year as entrance music to the Boston Red Sox radio broadcasts. This is probably a great irony to my late father, who as a die hard Yankees fan was required to hold disdain for the lovable enemy from the land of Yastrzemski, Larry Bird, and chowder. Stargazer (featuring the Munich Philharmonic Orchestra) continues to force its way onto hard rock radio despite the track’s nine minute length which is, of course, considered unmanageable on commercial radio.

Truth be told, any of the album’s six tracks bring a smile to my face whenever they pop up on a modern day MP3 shuffle. But there is no greater treat than listening to Rainbow Rising in its entirety, as it was meant to be experienced. There is so much variety to be found. From the fist-pumping, horn-raising Starstruck, to the slower, darker Run with the Wolf, and the catchy Do You Close Your Eyes, there is something for every rock and roll fan on Rainbow Rising. The writing was never better in Rainbow than it was with Rising, and the lyrical content set the tone for everything to come, from Black Sabbath’s Heaven and Hell to Dio’s Sacred Heart.

My favorite? Well, that would have to be Stargazer. I couldn’t have been more overjoyed than when my father performed Stargazer again with Dio in the late 1990s.

I hold many fond memories of the summer of 1976. Of spending two weeks with my late grandparents at my father’s new home in Encino, CA, that the success of Rainbow allowed him to afford. Of trips to Disneyland with my father, and long swims in the pool, of which I can still smell the chlorine if I close my eyes. Of sitting at the dining room table with colored pencils, trying to design a cover for a future Rainbow album. Time slips away.

The only question we are left with is, why, prior to my father’s death, did Rainbow never reform for one more album and one more tour? They came close on more than one occasion, but record company contracts and the egos of the band members prevented a dream reunion. It’s too bad. The word of rock badly needed a band like Rainbow and still does.

Although the 1978 followup Long Live Rock ‘n’ Roll is another high point in the band’s short history with Dio as vocalist, Rainbow never quite achieved with future albums the mastery of Rainbow Rising.

Thank you again to photographer Scott Braun for giving us this wonderful piece of nostalgia.