Empty streets. Neighborhoods vanished. The world is a tomb.

Tori awakens to find herself alone in her town. Her parents are missing. Perhaps they were kidnapped. Murdered. Or worse. And now the evils ones are coming for her.

Running from those who would murder her, Tori flees with a strange boy who seems to know her. Together, they drive south along the east coast and search for humankind. But the road is full of hidden dangers — death watches them from every shadow.

Now a secret power awakens inside Tori, a weapon which might save what little remains of the world. Will she embrace her power?

This pulse-pounding post-apocalyptic thriller will take your breath away and leave you wanting more. Fans of Stephen King and Hugh Howey should check out the Dark Vanishings series. 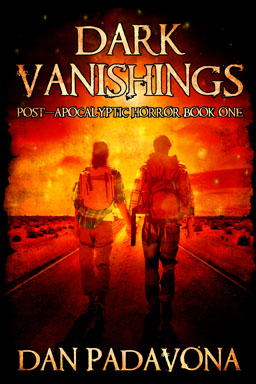 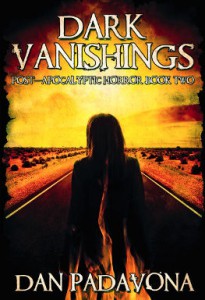 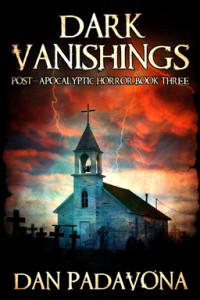 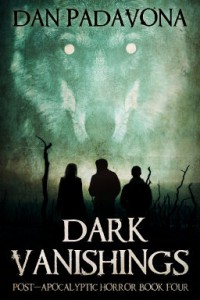 Readers calls Dark Vanishings a brilliant mix of post-apocalyptic survival fiction, horror, and fantasy. Compared to Stephen King’s The Stand and Robert McCammon’s Swan Song, the epic Dark Vanishings series follows end of the world survivors as they cope with their new lives and cling to the familiar past.

But the survivors aren’t alone in the world. A dark presence rises and forms an evil army bent of destroying what remains of humanity.

The world needs heroes, and an unlikely group of castoffs band together to defend the human race and battle an unholy fiend known as Lupan.

If you crave pulse-pounding thrills, bone-chilling horror, and everyday people coming together to survive the apocalypse, you’ll love the Dark Vanishings series.

See what readers like you are saying about Dark Vanishings:

“The intensity of the suspense in these books are more than I have experienced in a long time. I smile to think of all the faces I made while reading. The character building was beyond compare. I truly connected with so many of the people in this story.”

“What I enjoyed most about this series was the fact that it reads like a piece of classic literature, and yet you still get a dark, apocalyptic story. If you haven’t read Dan’s work yet, then I highly suggest you start today. And this is a perfect place to begin your new love affair with Dan’s writing.”

“Fast-paced with great characters. Similar concept to The Stand, but a much different take. I read both and I think I enjoyed this one more.”

“I would recommend this book to my friends . . . Dan Padavona is an amazing author. Steven King has nothing on you.”

“. . . A fascinating new twist on the apocalypse. It was a plausible story line with characters you could care about. The story never bogged down with useless filler, but rather clicked along with suspense and drama.”

“I did not want the story to end ,even though I was reading the digital set [in] one sitting.”

“Thank you for a wonderful series. It kept me spellbound. I truly hope there will be more to come from these wonderful people.”

“As a die hard Dean Koontz fan this series rivaled his archived thrillers! The characters were well developed and there was no forgone conclusion on how this story would end.”

Ready to immerse yourself in the addictive post-apocalyptic world of Dark Vanishings? Start reading now.