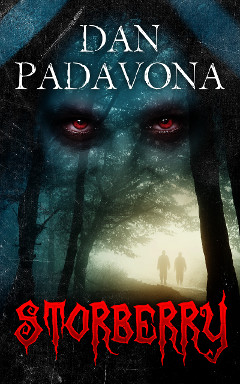 Monsters in movies and literature have come and gone, but none has lasted longer than the vampire. Perhaps the mysteries of the afterlife and good versus evil draw us to this mythical, blood-sucking creature. Since Bram Stoker penned Dracula in 1897, vampire horror has fascinated the world. Stoker’s novel inspired Stephen King’s Salem’s Lot, the most frightening vampire horror novel ever released. Since then, a slew of romance-based vampire novels, movies, and television shows have twisted these terrifying monsters into sullen objects of desire.

Yet the vampire horror novel will not die, even if you drive a stake through its heart. And one author is carrying the torch for fans of truly scary vampire horror.

Bestselling thriller and horror author Dan Padavona’s Storberry is lighting Amazon on fire with glowing reviews for its return to vampire horror. Set in the fictional eponymous Virginia township, Storberry is a terrifying story of two teenagers and a handful of adults trying to survive a night of terror. All the classic tropes are here: a haunted forest, campfire legends, and vampires who stalk and kill, rather than kiss.

From the book cover:

An ancient evil hunts the shadows, dormant for decades but hungry and stalking. And the sun will set soon.

When the beast closes in on the last remaining humans in Storberry, two teenagers are thrust into a nightmare of unspeakable horror, and a shy boy must fight for the town’s survival.

Make no mistake, this underground gem is a gothic tale that deserves mention with Stephen King’s best. Storberry unapologetically thumbs its nose at Twilight and The Vampire Diaries, targeting instead disenfranchised vampire horror lovers who gave up on their favorite genre.

Read what horror fans are saying about Storberry:

“This book is scary as hell. Don’t read it at night. There was a couple passages that totally freaked me out. It is very creepy, the setting is perfect and the author has made a great set of characters.”

“Even before the vampire invasion starts, I was thoroughly engrossed by the characters’ backstories and the general characterization, which I found to be one of the real strong suits of this novel. The action and the logic the characters used was well thought out. This was a well-written novel that I would highly recommend.”

“[Storberry] has put faith back in the idea that there is still good vampire fiction out there.”

“If you are like me, you miss good, old-fashioned vampires. The evil kind. The kind you fight with crosses and stakes. If this describes you, then you are in for a treat. Storberry delivers a classic vampire story in the tradition of Salem’s Lot, Vampire$ and The Night Stalker.”

“This book was written for horror fans by a horror fan. Dan Padavona reminds us that vampires are not brooding, sparkling teens. [Padavona] goes back to roots, making his vampires freaking scary. And scary they are…highly recommended.”

“You feel as though you are on the run with the characters and are scared out of your wits, but you have to keep reading to see what happens next.”

“Dan Padavona can really tell a good story . . . the tension builds slowly then takes off on a terrifying ride that doesn’t let up.”

“Great characters and storyline! Will keep you reading until the end, but keep the lights on!”

“At long last a creepy tale with relentless, frightening vampires that absolutely do nor sparkle or go to high school! Dan Padavona has crafted a story that pulls you along twists and turns, keeps you on the edge of your seat, and forces you to check behind the shower curtain with trepidation. This book is extremely well written and edited, a true pleasure to read!”

“. . . the story made me feel the way I used to be scared as a kid. Creepy stuff. I could close my eyes and feel like I was in the story.”

“Horror and suspense at its finest. You can feel the fear building with each page.”

Ready to find out why fans of truly scary vampire horror love Storberry?