From the dark mind of Dan Padavona, bestselling author of the Wolf Lake mystery and thriller series, comes a new anti-hero with a deadly purpose.

FBI agent Logan Wolf was the greatest criminal profiler to enter the Behavioral Analysis Unit. Then a corrupt politician framed the agent and hired a serial killer to murder Wolf’s wife, destroying his life. After fleeing from the authorities, Wolf found himself atop the country’s most wanted list. Now he’s a ghost hiding in every shadow. The government can’t find him.

He seeks revenge by tracking and murdering the world’s deadliest serial killers, dishing out his horrific version of frontier justice.

Wolf trusts only one person: the beautiful Scarlett Bell, the most-intelligent profiler the FBI has to offer. Though she refuses to admit it, she admires the vigilante. He cuts through red tape and takes vicious murderers off the street, rather than leaving them to the courts. Together, they hunt the most depraved minds stalking the night.

But Wolf needs to be careful. The FBI is searching for him. And every killer wants him dead.

The chilling return of Logan Wolf. These serial killer thriller books will leave you breathless. 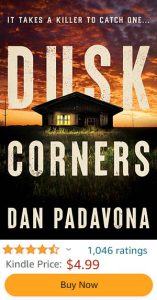 They call it the Devil’s Rock: an elevated plain in West Texas, where countless brutal murders occur every year, many of them unreported. The FBI can’t solve the crimes, and the power-hungry sheriff doesn’t trust the government to intervene.

Now two college students disappear on their way to a festival in New Mexico. Sensing the Devil’s Rock killer has struck again, Logan Wolf checks into a dusty old hotel in tiny Dusk Corners, the epicenter of the horror.

But the locals don’t trust outsiders, and soon the sheriff catches wind of Wolf, who disguises himself as the missing girl’s uncle. If the sheriff learns the vigilante’s true identity, the FBI will swoop in and catch him.

While searching for the missing students and the phantom serial killer, Wolf stays one step ahead of local law enforcement. But the killer waiting for him is a monster unlike anything he’s encountered.

Danger lurks in every shadow in Dusk Corners. 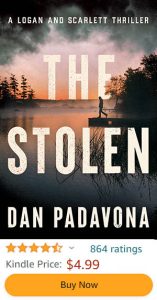 When a prominent couple disappear after a dinner date, the locals whisper that the Black River Killer is to blame. Two weeks later, the police fish the husband and wife out of the river, their bodies bloated and chewed.

Detective Jefferson Gildon is the only member of the force who believes the killer exists. The officers despise him for ratting out a corrupt cop, and the chief throws hurdles in Gildon’s path, wishing the detective would stop frightening the public with talk of a serial killer.

Vigilante Logan Wolf doesn’t play by the officers’ rules. He hunts the killer on his own while staying under the detective’s radar.  Wolf is every murderer’s worst nightmare.

If Gildon and Wolf catch the mythical killer, the detective will redeem himself.

But the murderer is watching Wolf’s every move. Lock your doors. The Black River Killer is coming. 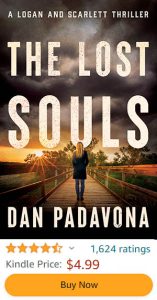 When a married man sneaks off for a moonlight tryst with his lover, he discovers a sight more gruesome than his mind can comprehend. The severed head of a woman stares at him with dead eyes. Someone tossed her body tossed in the weeds.

This isn’t the psychopath’s first murder. He’s struck before, and he will kill again.

The FBI sends Agent Scarlett Bell to Georgia, where she meets a beleaguered detective tasked with solving the crime.

Logan Wolf soon arrives to conduct his own hunt, but he must avoid the detective’s eyes unless he wishes the FBI to catch him. A disease ills the vigilante and devours him from the inside. He’s a shadow of his former self. Weak. Dying.

How can he stop a vicious serial killer when he can barely stand?

Yet things are about to get worse. The murderer has set his eyes on Scarlett.

Can Wolf catch the killer before Scarlett becomes a victim? 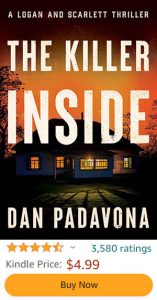 The Killer Inside – Book 4

Dan Padavona redefines the meaning of fear in this terrifying thriller.

A monster stalks rural Iowa. When the sheriff conducts a wellness check on a local who isn’t answering the phone, he discovers a grisly sight that permanently etches itself into his memory. A murder scene like none he’s ever witnessed.

The killer is escalating, craving the blood of new victims. Only one man is capable of entering the murderer’s mind: vigilante serial killer Logan Wolf. But he’s frail and dying. His body has turned against him.

After the FBI sends Agent Scarlett Bell to investigate the murder, Wolf secretly accompanies her. She longs to get him the medical attention he needs, but the most wanted man in the country can’t walk into a doctor’s office without drawing notice. As she hunts for the killer, Scarlett places her trust in a back-alley physician, a doctor who treats the criminal underground. Can the doctor save her friend?

And Wolf is in no condition to stop him.