“The heart-pounding FBI serial killer thriller series that will leave you breathless.”

Now Scarlett faces a killer unlike any she’s encountered. Bloodthirsty. Cunning. Insane. But the killer is a ghost, a phantom hiding in plain sight, and Scarlett must untangle a confusing web of evidence if she hopes to track him down. 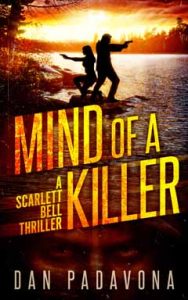 Want to read all ten of the Scarlett Bell FBI series books at a substantial discount? Download the Scarlett Bell Collections today and save 47% off the regular price! Available on Kindle, in paperback, and audiobook.

“This series is such a great read! I honestly could not put them them down. The characters are very believable. The storyline was bite your nails great! There were times when I would exclaim out loud!”

“MUST READ if you like murder mysteries, serial thrillers. Absolute awesomeness!”

“I loved all 10 of the Scarlett Bell books. I only wish there were more written. The writing was superb; scary and credible. I really enjoyed the character development too. Dan Padavona is at the top of his game and I look forward to more.”

“What a great series. Top notch writing and fantastic storytelling.”

“What an excellent surprise! First time reading Dan Padavona and his Scarlett Bell Series. It is incredible! Fast paced, clever and kept my attention with its gripping plots. A must read!”

“Author brings his characters to life easily and makes you want to follow their story. Looking forward to moving on to his next series.”

“This is a thrilling series. It keeps you in suspense all the way through the book. I highly recommend this series.”

“I really love detective and FBI suspense novels and I couldn’t put this one down.”

The Origin of the Scarlett Bell series

This FBI thriller series came about in 2018 while my wife and I celebrated my fiftieth birthday in the Finger Lakes. As I looked out over the waters of Skaneateles Lake, I opened my Kindle to a serial killer thriller called Dead End Girl, written by LT Vargus and Tim McBain. A long time had passed since I’d had this much fun reading a thriller. Dead End Girl contained everything – creepy thrills, an FBI mystery, tongue in cheek humor, and elements of horror, including a vicious serial killer loose in Ohio.

I knew then what I wanted to write. The first story in the Scarlett Bell FBI thriller series is Mind of a Killer, which takes place in the fictional Finger Lakes village of Coral Lake. The village’s inspiration is Skaneateles, and locals may recognize the terrain I describe.

It wasn’t long before the series developed a mind of its own. I reveled in the excitement of Agents Bell and Gardy hunting deranged murderers, and all along, personalities and relationships advanced.

The Scarlett Bell thriller series remains one of my most entertaining projects to conceive and write. I sincerely hope you enjoy the stories. – Dan Padavona