“Have You Checked the Children?”

The opening scene (about twenty minutes) is arguably one of the most frightening scenes in horror history. Fred Walton expertly directs, using camera angles, peripheral sounds, and tempo to build tension. It’s not much of a spoiler when I tell you that the story begins with a babysitter (Kane) being terrorized over the phone by a deranged caller…a caller who happens to be inside the house. After all, the trailers made clear what the opening scene entailed. 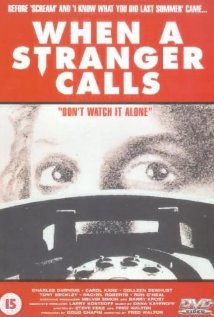 Yet Walton’s direction is so spot on. Kane’s performance is so convincing that we are forced to squirm along as the horror unfolds, knowing what the plot twist will be.

After the incredible first scene, When a Stranger Calls goes into a decided lull. The second third of the movie is half-suspense, half-detective story. The climatic final third does not disappoint, bringing the tension back in spades. I particularly like the final scene…don’t worry, no spoilers forthcoming.

Another oddity (besides the switch to detective story mode) is the unusual portrayal of the villain. We get to know him pretty well in the second act, and he is painted in a rather pathetic light. This was, and still is, an unusual angle to take in a horror movie. Usually the villain, if we are to know him/her at all, is built to be increasingly frightening. In When a Stranger Calls, we are introduced to a very human monster, one who gets kicked around quite a bit. This is subtly effective because it makes him quite believable.

About the only thing I can say against this movie is that it borrowed too freely from Black Christmas. When a Stranger Calls is a classic, terrifying thriller that won’t disappoint.

Much like Black Christmas, When a Stranger Calls got the Hollywood remake treatment in 2006. I’ve seen it, and I own it on DVD. It pales in comparison to the original, lacking the foreboding tension that Walton created or the premium acting Kane delivered. However, it is a fun bit of slasher horror and worthy of popcorn munching fun on a dark and windy night. My advice – stick with the original.

If you truly love When a Stranger Calls, then you would do well to pick up the little-known sequel, When a Stranger Calls Back (1993). The sequel, a made-for-TV horror movie, sees the return of Kane and Durning. Walton directs again. Amazing as it seems, the sequel is arguably even more frightening than the original. How often does that happen in the horror genre? Jill Schoelen has a breakout performance as Julia Jenz. If you can track it down (not easy), I highly recommend you watch it.