Raise your hand if you’re glad spring is almost here.

I just completed the manuscript for The Bone Forest, the tenth book in the Wolf Laker thriller and mystery series. The novel is now in my editor’s hands. You will be able to read this exciting new series entry early this summer.

Speaking of new books, the new Logan and Scarlett thriller, The Stolen, hits Amazon April 21. Pre-order the kindle version today, and the book will magically appear on your e-reader as soon as it releases.

The paperback version will be also be available by April 21, and the audiobook is coming soon. 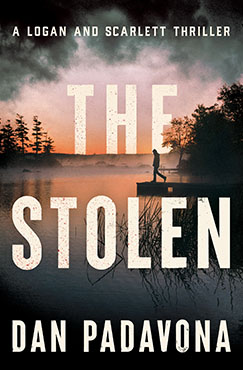 The night Sutter and Monica Steen leave for dinner, they never return home.

Two weeks later, the police drag their bodies out of the river, sending the town into a panic.

The Black River killer is back. Nobody is safe.

When another person goes missing, Jefferson Gildon, a police detective with a checkered past, leads the investigation. But it takes a twisted profiler to enter the mind of a psychopath, and only fugitive serial killer Logan Wolf can solve the case. The trouble is, the FBI is hunting Wolf, even as he tracks the murderer.

If Detective Gildon apprehends the murderer, he’ll redeem himself and stop the psychopath from stealing another life. But he needs Wolf’s expertise to apprehend this new deadly threat.

Lock your doors. The Black River killer is coming.

As always, thank you for being a loyal reader and supporting my storytelling. You are my inspiration!

2 thoughts on “A New Serial Killer Thriller: The Stolen”