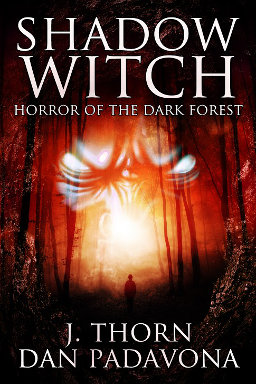 Shadow Witch is available now in paperback and in Kindle format at Amazon.com.

Shadow Witch is the story of Thom Meeks, who lives with his family in Droman Meadows under the protection of the Kingdom of Mylan. An unusually long winter creates anxiety in the village and some believe it to be the return of an ominous force known as the Shadow. When a pack of dread wolves lays ruin to Droman Meadows, Thom escapes with his wife and four daughters. They set out on the Mylan Road in hopes of finding refuge in the capital, but dark forces emerging from the primeval forest will challenge them for their eternal souls.

The early reviews for Shadow Witch are very strong. J Thorn and I could not be more pleased with your support and the excitement Shadow Witch has generated.

Thank you for your continued support of indie fantasy and horror. When you finish Shadow Witch, please let me know what you thought of the story. Also, if you enjoy Shadow Witch, please leave a review on Amazon. Reviews are very important for independent authors, as readers like you depend on reviews when taking a chance on an author they have not read before.

Stay tuned for information about the first episode of Dark Vanishings, my post-apocalyptic horror adventure, set for release later this spring.