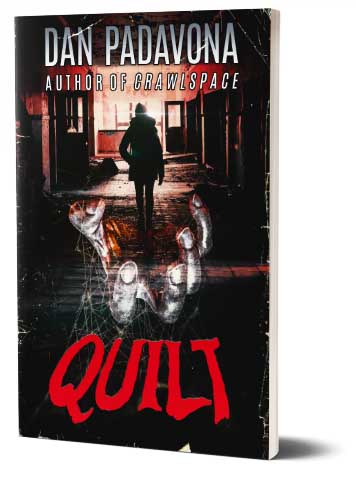 “This is my darkest story to date,” says Padavona. “Fans of dark horror and splatterpunk should have a great time with Quilt, especially fans of Skipp, Ketchum, Laymon, and Bryan Smith.”

The story follows a female teacher, who becomes concerned when a promising student from the projects stops coming to school. Eventually she sees no choice but to venture into Jasmine Heights, a city section run by gangs. Something dark begins to follow the teacher, and then the horror kicks up to extreme levels.

Asked about the name, “Quilt,” Padavona opted to keep the book title’s meaning a secret.

“There isn’t much I can say about the title without giving too much of the story away. Suffice it to say, the plot twist got a rise out of my beta reading team.”

“Chad is a terrific storyteller, and he has an eye for details. I learned a lot from Chad while working with him on Severity. I took those lessons and created the most concise and horrific story I’ve ever told. No fluff, no filler. It’s relentless.”

Speaking of concise, Quilt is classified as a long novella at its 60-page length. We asked Padavona why he chose to write a novella and if he considered expanding the story into a full novel.

“Brian Keene asked me the same question about The Island, another novella which was a candidate for a full length novel. As with The Island, I felt Quilt’s story was best told at its current length. You get character background, and then you’re knee-deep in the splatterpunk horror and gore. I love the way Quilt flowed.”

Asked if he favors the novella length, Padavona said he does, and will likely release more novellas in the coming months.

“I had a discussion with Kealan Patrick Burke about Sour Candy last year, a brilliant horror novella. Kealan told me he thought the novella was the perfect length for gripping horror, and I happen to agree with him.”

To join the discussion on Twitter and other social media platforms, use the hashtag #QuiltHorror.