Perhaps the most common trope among horror movies, especially the classics of the 1970s and 1980s, is that of the final girl, the last survivor.

While the trope has existed for nearly fifty years, the term “final girl” is a more recent phenomena. Carol J. Clover penned the term “final girl” in her book, Men, Women, and Chainsaws: Gender in the Modern Horror Film. If you’re unfamiliar with the term, you’ll recognize the trope in Laurie Strode (Halloween), Ellen Ripley (Alien), Sidney Prescott (Scream), and hundreds of strong women represented in horror movies and novels. My personal favorite is Ginny, played by Amy Steel, in Friday the 13th Part 2. 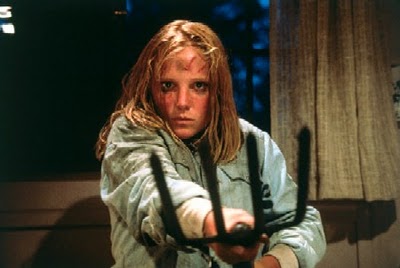 The Final Girl phenomena stands in conflict with the theory that horror movies demean and sexualize women. And to be fair, the lesser quality horror movies of yesteryear certainly did. Think Cheerleader Camp and the countless me-too slashers that pervaded movie screens forty years ago. However, the final girl is often the most intelligent, resourceful, and resilient character in a horror movie.

Remember Laurie Strode in Halloween? She didn’t believe in the boogeyman . . . at least not until the very end of the movie. Yet she was the only character, outside of Dr. Loomis, who sensed danger and acted to safeguard the children she babysat. Can you recall a more powerful badass than Sarah Connor in the Terminator? She was charged with saving humanity against a cyborg Arnold Schwarzenegger. And that dude became governor!

You’ll have a difficult time finding strong male characters in horror movies. Most are sex-crazed buffoons, who bumble through the movie, making terrible decision after terrible decision and never recognizing the danger lurking in the shadows. It’s always up to the woman — the final girl — to save the day.

Classic horror has long influenced my writing. I titled book eight in my Wolf Lake thriller series The Final Girl, as a nod to all the great final girls in horror history.

Who are your favorite horror movie final girls?