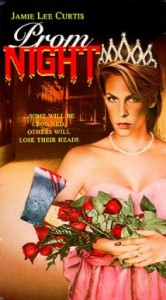 In 1978, John Carpenter released an independent horror movie titled Halloween. Stylish, creepy, and original, Halloween terrorized audiences and packed movie theaters for several months, the popularity fueled largely by word of mouth. Halloween became one of the most successful independent movies ever released, and the slasher era was born.

Riding the coattails of John Carpenter’s classic, slasher movies poured forth between 1979 and 1989 like torrents of gore from a Jason Vorhees machete wound. Some movies hit, and some missed. Instant classics such as Friday the 13th, When a Stranger Calls, and Just Before Dawn represented the very best of the sub-genre. Others, not so much.

Some combined elements of pop culture to truly awkward effects, and others were just plain weird. Here are a few of my favorite awkward moments in slasher movie history. And just so we are clear, I actually enjoy all three of these movies. So don’t send me hate mail for ripping on your favorite slashers.

Let’s start at the bottom, shall we? The prom dancing scene of Prom Night (1980) is a flamboyantly gaudy reminder that disco was actually popular at one point in history. When you watch this scene, be sure to catch a glimpse of Airplane’s Leslie Nielsen in the foreground.

Yep, that isn’t going to go down as Jamie Lee Curtis’ proudest onscreen moment. Once the jackets get thrown off, you just know that some bad-ass disco dancing is going to go down. Saturday Night Fever this is not, and I half-expected the male dancer’s jacket to fly into the screen and land on his head, ala Airplane!

And now we move from the absurd to the bizarre. Girls Nite Out (1982), also known as The Scaremaker, featured a psychopath stalking pretty girls on a college campus. Seen it all before? Well, what if the killer was dressed up as a big, loveable teddy bear? Bet you haven’t seen that before, have ya, Slick?

The only thing better than seeing a teddy bear murder someone is listening to the same teddy bear screaming, “B*tch” and “Whore” over and over. Gotta love that. As bizarre as Girls Nite Out is, I admit to watching this one every few years. It’s not a bad movie to be quite honest, despite an absolute mail-in of a performance from Hal Holbrook.

Now let’s press the accelerator to the floor, shall we?

“Bigfoot’s not playing games anymore. Next time he won’t be happy just to scare us.”

This line is just one of many such gems from Night of the Demon (1980), the only slasher movie I am aware of featuring Bigfoot. Warning – this trailer is extremely graphic, as well as great, wicked fun. No seriously, it’s really graphic. Bigfoot is not to be messed with, kids.

At one point in the movie, the searchers in the woods find their boat oars smashed. Wondering who or what could have smashed their oars, one of the searchers suggests that it might have been an elephant. I laughed for about five days after I heard that line.

In another scene, Bigfoot uses some sort of demonic telekinesis or possession ability to cause two girl scouts to murder each other. Bigfoot had mad skillz in this movie. In yet another scene, a man had his member…uh…dismembered by Bigfoot. Jack’s Beef Jerky, anyone? Stop messing with Sasquatch!

I don’t watch Night of the Demon often, my friends. But when I do, I consume every last cheesy morsel of it.

Those are my three favorite awkward slasher movie moments. What are your favorites?