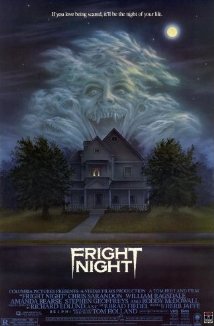 Ready to have fun? You’d better be, because that is what Fright Night (1985) is all about. A classic horror date movie, Fright Night tells the tale of Charley Brewster (William Ragsdale), an unassuming teenager who suspects his new neighbor is a vampire.

Of course, nobody believes Charley’s story, even when the missing persons count begins to pile up and the neighbor’s sketchy friend is seen carrying large bags out of the house in the middle of the night. To make matters worse, Charley’s love interest, Amy, portrayed by Amanda Bearse of Married With Children fame, falls for the good looking neighbor.

A classic cat-and-mouse game ensues, with Charley trying to convince his friends, family, and the police that his neighbor is a vampire without making everyone think he is insane. Eventually Charley calls in Peter Vincent (Roddy McDowall), a B-movie legend known for his penchant for killing vampires, to help him rid the neighborhood of the evil living next door. But as Peter Vincent, Vampire Killer, discovers, killing vampires in real life is a lot more difficult than he makes it look in his movies. 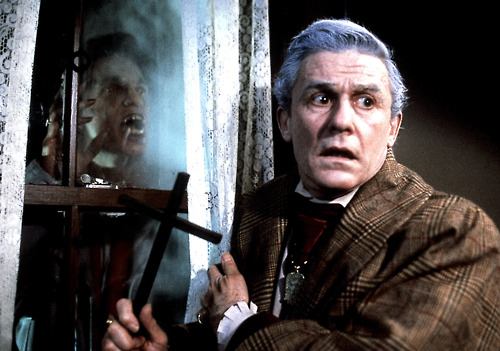 Fright Night expertly combines comedic relief with Gothic horror, with the end result being one of the better popcorn-munching horror date movies of the 1980s. The production quality is strong, the writing (Tom Holland) is creative, and the acting is competent from the star roles down to the bit players. McDowall in particular shines in his role, appearing to have a ton of fun as he paints a portrait of a washed up B-movie star battling his own demons. One of my favorite McDowall moments from Fright Night is when he complains that today’s horror fans are more interested in masked looneys killing virgins. Great line, except that I don’t think those girls in Friday the 13th were very virginal.

Evil Ed (Stephen Geoffreys) is one of the top sidekick 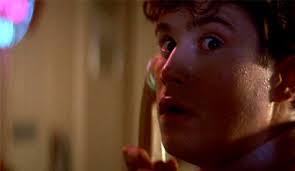 characters of the 1980s, and once you hear his laugh, it will stick in your head forever. Chris Sarandon delivers a knockout performance as the suave bloodsucker, Jerry Dandridge.

The effects are excellent and never overused, and there is a nice soundtrack drifting in the background that should kindle feelings of nostalgia for anyone who grew up in the 1980s.

I’m not going to suggest Fright Night is terribly frightening. It’s not. It’s just a fun-as-hell suspense/horror movie, with just the right amount of comedic relief sprinkled in amid the gore.

Grab your Fright Night  DVD and cuddle up beside your significant other. Don’t forget the popcorn!