For the past few months I have been previewing my forthcoming post-apocalyptic series, Dark Vanishings. It’s high time I delivered a progress update, and I’m pleased to announce the first episode in the Dark Vanishings serial will be released in paperback and on Kindle in May.

Having received a few questions regarding what the story is about and how the series is structured, I decided to put together a small preview to whet your appetite. 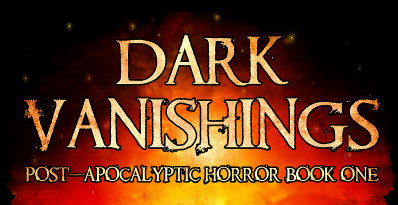 “What would you do if almost everyone on earth suddenly disappeared? Where would you go? What choices would you make?”

The premise of Dark Vanishings begins by asking this question. Would you seek others and try to rebuild some semblance of society? Would you be so grief-stricken that you couldn’t act? All doors are open to you, meaning you can live anywhere and do anything you please.

But there is more at work than meets the eye. The mystery of why everyone disappeared still exists, as does the fear that not everyone left on earth can be trusted.

Dark Vanishings is a serial-based series, somewhat in the vein of Stephen King’s Green Mile and The Blackstone Chronicles by John Saul. The first three books will be released approximately one month apart, with Dark Vanishings 1 hitting the shelves in mid to late May, Dark Vanishings 2 being released in late June, and Dark Vanishings 3 coming out in late July. I anticipate four or five books in the series, each between 150 and 200 pages.

The Dark Vanishings concept fits perfectly into the serial format, as it follows different people and groups vying to survive the dangers of a lost world. However I appreciate not everyone will prefer a serial format. For this reason, when all books in the series are written, I will release one large novel encompassing the entire story. You will have a choice to follow along with the serial format, reading the individual books in nice, manageable chunks, or purchasing the compilation.

In the coming weeks, I will reveal the cover for Dark Vanishings 1, as well as zero in on a release date. I will offer a pre-sale for book 1 at a significant discount as a way of saying thank you to everyone for supporting my journey as an indie horror writer.

Remember you can get updates on my latest projects by signing up on my VIP list. Once or twice a month, I send out emails with contests, giveaways, release dates, and fun facts about my stories. I hope you decide to become a VIP!

You can also find me on Facebook, where we have a lively group of over 360 people signed up as of today.