Once the ink has dried and the author has poured his or her soul onto paper, the waiting game begins. What will people think of your story? Will the plot keep readers turning pages, wondering what is going to happen next? Will they believe your characters and their motivations? 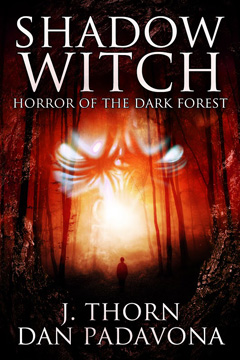 J Thorn and I wrote Shadow Witch, a combination of dark fantasy and brooding horror, over a several month period, beginning in late autumn 2014 and concluding with final edits in late winter. Two seasons passed, both of us anxious to know how Shadow Witch would be received.

The reviews have come in very strong, exceeding our expectations. Nothing pleases us more as authors than to know readers are captivated by our world and story.

Today I am proud to share snippets of some of my favorite reviews for Shadow Witch. If you are on the fence, unsure if horror and fantasy can co-mingle, hopefully these reviews will help you decide. To everyone who has supported our novel, we thank you from the bottoms of our hearts.

What an amazing read. This story will engulf you in an amazing world of horror and adventure. I’m a huge fan of both these writers, so when I saw that they were writing a book together, I was more than excited. I love Dan’s pacing and how well he can build tension, and I love J.’s character development and world building, and both of their strengths have a head on a collision in this enthralling read. – Zach Bohannon, Author of Empty Bodies series

The Shadow Witch hit on a lot of different emotions for me… needless to say, I had to read it in one sitting. The writing is so well done that you quickly feel the characters anguish, fear, insecurities and find yourself looking behind trees for them. J Thorn and Dan Padavona found a blend in their styles that transported me to a different time, but didn’t make me feel like I didn’t belong. Well done! – Cat DeVine

The night is dark, and full of terrors. But so is the day.

In fact, the moral of this story should just be, “Don’t go into the woods, ever!” But where else is there to go when you’re being chased by werewolves? Into the arms of something far worse than wolves, that’s where. Thorn and Padavona do a fantastic job of creeping the hell out of their readers in this tome. Monstrous shadows, hordes of bugs, and a heavy, cloying atmosphere that you can almost feel as you read. I swear I could even hear the horror-movie suspense soundtrack at certain points. Awesomely disturbing. And the twists! Who’s good? Who’s evil? What brought this blight upon the land, is there a cure, and will Thom’s family escape with their lives (and sanity) intact?

My only complaint is that I wish the characters were developed more. I want to know more of their backstories, more detail on the world in which they live and how they came to be where they are, more insight into their motivations. This is a small complaint, though; such detail would lengthen the book considerably, and the main protagonists are pretty well-drawn as they are.

‘Shadow Witch’ is a dark epic fantasy on an intimate scale. It has all the tropes of fantasy (magic, monsters, and vicious swordplay) as well as all the makings of great horror (suspense, mystery, bloodshed, and darkness). You feel for the characters, and you want them to make it, even when you’re sure they won’t.

Because something wicked waits in the woods… – Luke Morris

J. Thorn and Dan Padavona team up for what they term “The Game of Thrones meets Blair Witch”, I’d say they did nailed that rather well. Shadow Witch, Horror of The Dark Forest, for me started out like a Dragonlance novel, and reading like Margaret Weiss and Tracy Hickman, is a very good thing. But then, it got better and went very Brothers Grimm, but Grimmer. The last half of the story has that flavor, very Grimm and dark. If you are a fan of the Grimms, or Dragonlance, I daresay you can’t go wrong in reading this novel, the twist at the end is great, read it, you won’t be disappointed. – Robert Pettigrew

Just finished this book and i have to say i am impressed . great story line and charecters that come alive right before your eyes.I felt close with the charecters, like i actually know these people thats how good the writing is. I had to read this book in one sitting as the writing pulls you in. The ending is truly amazing. if you are a fan of dark horror you can not go wrong with buying this book, and if you are a true fan then this book is a must read !!!! thank you for another great read…cant wait to read more. – Michelle Gilliam

Separately, Thorn and Padavona deal thrills and chills enough to shake a reader’s sensibilities; together, well, this ride promises to leave you breathless. The beginning rushes at you and spins into a spiral of violence that throws an innocent family onto a race against a horror that never lets up. Then the story begins the real chase against an evil which promises to leave no prisoners. This story is the real deal; read it at your own risk. But, just read it. – Dean Watts

That’s just a small sample of the feedback J Thorn and I have received for Shadow Witch. So what do you think? Should we write a sequel?

To keep up to date with future novel releases and automatically enter yourself to win prizes in future contests, please sign up for my VIP list.