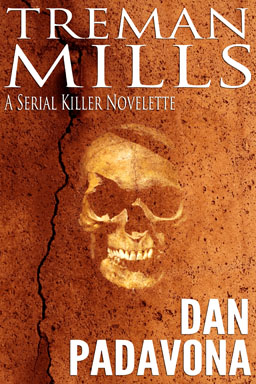 Just in time for Halloween, Dan Padavona released Treman Mills, a slasher horror novelette in the spirit of vintage slasher and proto-slasher movies such as Texas Chainsaw Massacre and Maniac.

“Like many others, I grew up with the Universal monsters before graduating to the Hammer films,” said Padavona. “Everything changed the first time I saw Halloween. I was hooked. Over the next several years, I drank in the gory 1980s slasher horror craze, from Friday the 13th to Madman to Just Before Dawn.”

“Writing some sort of serial killer or slasher story was inevitable. Treman Mills has everything I want in a novelette – it’s concise, scary, and downright gory when it needs to be. I don’t know about you, but being trapped in dilapidated building after dark creeps me out.”

Will Treman Mills be Padavona’s only foray into slasher horror?

“I assure you this won’t be the last. My forthcoming novel, Crawlspace, will have a decided slasher vibe to it.”

Hurrying to get home before dark, Rachel and Charlie take a shortcut through the dangerous section of Treman Mills, a town where five brutal, unsolved murders have occurred in the last year. When the Black Thorns gang catches them on the wrong side of town, Rachel and Charlie flee into an abandoned building.

But they are not alone in the darkness.

If you like your horror gory and bloody, Treman Mills is the story you’ve been waiting for.

Download Treman Mills direct from Amazon for only $0.99. For an even better deal, for $2.99 you can download the new edition of The Island, which includes Treman Mills, One Autumn in Kane Grove, and The Island.

Let us know what you think of Treman Mills by posting your comments below!

Authors Similar to Blake Pierce You Can Read on a Kindle
Reading from The Face of Midnight
Never Forget Me: A gripping new psychological thriller