“If you ask me, though, nature sucks.” 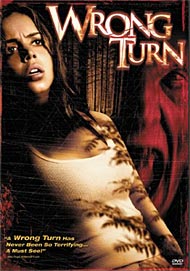 When director Rob Schmidt brought Wrong Turn (2003) to the screen, horror fans rejoiced over the movie’s potential to return the genre to the gory 1980s. All the pieces seemed to be in place – inbred, murderous cannibals, teens or twenty-somethings lost in the woods, and unapologetic horror that didn’t bother to nod and wink at the audience as did so many other movies during this period.

The story begins with Chris (Desmond Harrington) rushing to get somewhere important. The movie doesn’t go into the specifics of where he is racing off to, and maybe it really isn’t important that we know. When he gets stuck behind a traffic jam, he hits the back roads and climbs into the forested mountains of West Virginia. Yes, he took a wrong turn.

On his way to wherever he meets a few more young people, including the lovely Jessie (Eliza Dushku). But little do they know that eyes are upon them in the deep, dark woods. And when their members start disappearing, they learn the terrible truth – a family of inbred cannibals means to chop them up, one-by-one. 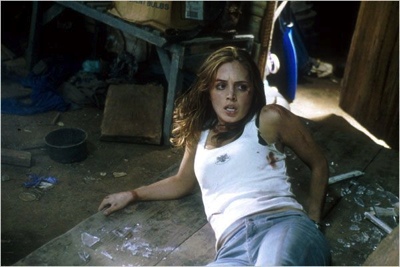 Wow! What a setup. This appeared to be the movie horror fans had been waiting for since Tommy Jarvis hacked Jason into tiny pieces at the end of Friday the 13th IV. All the ingredients were there, yet somehow Wrong Turn never hit its stride, and I still can’t put my finger on exactly what was missing.

For one thing, Wrong Turn is often gory but rarely frightening. After the initial killing in the woods, which I admit was chilling and well-executed, Wrong Turn lost its touch to deliver scares. Despite the awesome setting and the setup of youngsters fleeing a family of murderers, the movie never again raised the hairs on the back of my neck. Some pan Wrong Turn for its lack of originality, but I don’t. Give me this plot a hundred times over, and I will flock to the theater each time. Wrong Turn seemed halfhearted, as though it knew it wanted to be more but was too ashamed to live up to its full potential.

One major issue, in my opinion, is the makeup for the cannibal killers. They looked so ridiculous to me that I found myself shaking my head when I should have been protectively pulling the blanket up to my chin. Is it just me, or do the cannibals look more like orcs than slasher movie monsters?

Also, I didn’t care about Chris. Maybe if the movie had spent a little more time setting up his character or reason for racing to get somewhere, I might have sided with him more. Instead, he just seemed like another impatient jerk who couldn’t wait for the traffic jam to clear. Even Dushku’s Jessie fell flat, though I was cheering for her to be a top-notch final girl. And while bow-and-arrow is a realistic way for a backwoods killer to hunt victims, it isn’t quite as frightening as a machete or an axe. I want my killers to be scary, not efficient.

The cliche of the West Virginia mountains being full of inbred cannibals is admittedly bothersome. I think we would all be better off if we made fewer commentaries about geographies and people we know little about, and frankly many of the nation’s worst killings have taken place in supposedly enlightened areas such as southern California and New York.  But as much as the West Virgina trope grates on me, it doesn’t ruin the movie for me. Rather, I just think Wrong Turn failed to be a scary movie.

Then again, maybe I’m the one who is missing out. Wrong Turn has more than its fair share of fans, and though nobody will ever compare it to Deliverance or Friday the 13th, the franchise now has six movies under its belt, including Wrong Turn 6: Last Resort, released in 2014. There are far worse horror movies than Wrong Turn, so give the DVD a spin and decide for yourself.