“Go ahead. The dark ride’s waiting.” 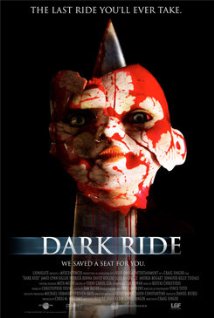 The post-Scream (1996) era was typified by watered-down, self-aware horror and torture movies. Then director Craig Singer brought Dark Ride 2006 to the screen, and horror was transported back to 1980 for 94 gory minutes.

It is impossible not to draw comparisons between Dark Ride and Tobe Hooper’s Funhouse (1981). Both horror movies qualify as slashers, and both are set within carnival fun houses. But whereas I rate Funhouse as a good movie which should have been much better, I consider Dark Ride an overachiever – a movie many horror fans expected to flop but ended up being quite competent.

Dark Ride is the story of several college friends heading on a brief vacation. The classic and Scream-era slasher character tropes are on full display, including the good looking guy (Steve), the old-movie-quoting nerd (Bill), and a couple of hot girls.

A gas station attendant, after attempting to solicit sex, hands Bill an advertisement for a dark ride in Asbury Park, New Jersey, reopening after a long hiatus (I got a chuckle out of this, having driven to Asbury Park for a Tool concert back in the late 1990s). Dark ride is an all-encompassing term used to describe an indoor theme park ride in which riders travel through different scenes in moving vehicles. Typically the term dark ride is used to describe guided funhouse and haunted house rides, but less intimidating attractions such as Disney’s The Many Adventures of Winnie the Pooh also qualify. In this case, dark ride refers to the haunted house variety. 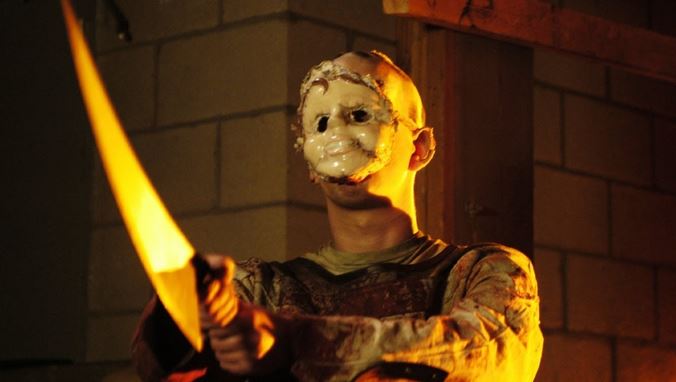 You might be wondering why the Asbury Park dark ride was closed for so long. If you guessed “gruesome murder many years ago,” then you win. And if you went for the horror trope double bonus and theorized that the killer was back, you won the whole showcase. Tell them what they won, Johnny.

From the scary, masked killer to the partying, nudity, and gory murders, Dark Ride 2006 seems like a movie that should have been released 25 years earlier. The killer, Jonah, is pretty intimidating despite the strange child’s mask he wears. Apparently Jonah grew up watching the Friday the 13th movies, as he takes pleasure in beheading people having sex.

Dark Ride doesn’t attempt to break new ground. Rather it is a throwback, perhaps even a homage, to the glory-gory days of the early 1980s. The creative team behind Dark Ride are onboard for all the right reasons. It is clear to me that the writers and director are fans of 1980s horror movies, unlike the multitude of filmmakers who jumped on the Scream bandwagon for a quick buck. This movie just feels like an old school horror movie. It isn’t ashamed to go for scares without constantly winking at us, as though we are all in on the same joke. Even the two girls at the beginning of the movie made me wonder if the director was nodding at Kubrick’s The Shining.

Give Dark Ride a chance. It is 100% unabashed horror.

Curious? Then check out Dark Ride 2006 part of the After Dark Horrorfest, on DVD.