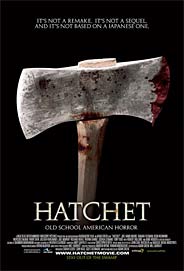 My initial reaction to Adam Green’s slasher homage, Hatchet (2006), was confusion. The highly anticipated horror release was promoted as a return to 1980s horror, and I was not the only fan breathlessly waiting to see what Green would deliver.

Hatchet is hardly straight horror. The comedy angle is hit very hard throughout, but don’t think for a moment that Hatchet is another Scream (2006) where the movie is poking fun at its genre. Instead, Hatchet is funny in the sense that many of the Friday the 13th movies are funny. However, I was initially put off by the comedy, having expected pure horror. It took until halfway through the movie before Hatchet won me over, and once I was on board, I had a lot of fun.

Hatchet’s monster is Victor Crowley, a horribly burned man who was taunted as a child. As for the back story, there was prank involving fire that went wrong, and I think you can guess what became of little Victor. Pretty standard horror fare. Years later, Victor is out for revenge.

Set in the Louisiana swamps, Hatchet’s setting is mouthwatering. The scenery, although not commonly utilized before by similar movies, seems a natural slasher hunting ground. The production quality is solid, and the camera work and lighting bring the swamps to life. The acting is also better than average, especially once you realize the comedic characters are intentionally overacting. 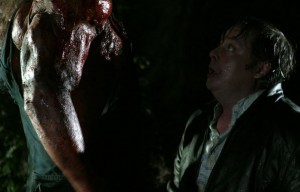 The plot is as simple as it gets: an excursion into the swamps goes awry and leaves several people stranded, including a couple of hot girls who are making one of those college girls gone wild sorts of videos. The jokes are actually funny, and at no point did I feel like Green and Hatchet were making fun of horror movies. Raunchy jokes and goofy characters aside, when Green decides to bring the gore, he goes for the gusto.

Crowley is portrayed by none other than Kane Hodder, the former Jason Vorhees, instantly lending credibility to Hatchet’s psycho monster. Crowley reminded me most of Madman Marz from the movie Madman, and Crowley is a similar name to Cropsey, the urban legend serial killer that Madman and The Burning were based on. Coincidence?

Hatchet utilizes interesting cameos and supporting roles, including a hick boy played by Joshua Leonard of The Blair Witch Project and Tony Todd as a tour guide. Perfect! 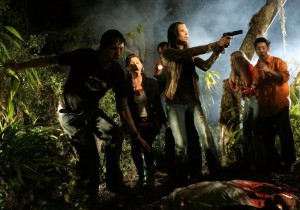 Hatchet is a competent slasher with laughs. I generally recommend this movie to fans of the sub-genre. But a few caveats. For one thing, I was never able to figure out if Victor Crowley was a real psychopath running amok or a ghost. Hatchet handles Crowley’s nature ambiguously. Secondly, the buildup for Hatchet was misleading. If you go into the movie expecting straight horror, you will set yourself up for a letdown. For some, the comedy may be laid on too thick. Finally, at no point did I find Hatchet the least bit scary. The final scene might make a few people jump (I won’t give more away than that), but that’s about it.

If you are up for laughs, gore, and a nostalgic homage to the party slasher movies of the 1980s, give Hatchet a try.