Fans of end of the world fiction will be excited to know Dan Padavona’s climatic finale in the Dark Vanishings series is available now on Amazon. Dark Vanishings 4 is the most tense, action-packed story in the post-apocalyptic horror series. 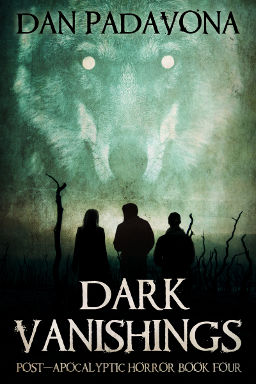 Uniquely combining elements of dark fantasy and adventure against a horror backdrop, Dark Vanishings quickly made its mark on the Amazon charts, appearing in the Top-20 for U.S. Horror in its first week.

Can Tori withstand the evil of Victor Lupan? Where will Ricky go after escaping the Florida Bliss compound? Who is the mysterious man who claims to be Blake’s father and where did he come from?

With an exciting and satisfying climax, Dark Vanishings 4 breaks new ground in post-apocalyptic, end of the world fiction.

“The fan response to the Dark Vanishings series has been amazing,” said Padavona. “The first three novels in the series introduced a lot of characters and left plenty of questions. The fourth novel answers all of them.”

When asked what he liked most about the end of the world book series conclusion, Padavona said, “While the pacing was exactly what I was looking for and the horror hit dark and hard where appropriate, I most enjoyed the way the book ended. There is enough of an opening left that the series could branch out in the future, or it could close very satisfyingly with book four. Either way, I’m happy. I came to love many of these characters and spent the last twelve to eighteen months of my life with them. It was sad to say goodbye, but perhaps we will meet again one day.”

Without giving away any spoilers, Padavona says the novel’s ending properly sums up the story and stays true to the characters.

“It seems like just yesterday Tori was on the run, and I was trying to figure out how Viper could escape from a locked police car. I hope I did both of them justice.”