“You can’t kill damnation, Mister. It don’t die like a man dies.” – Halloween 4 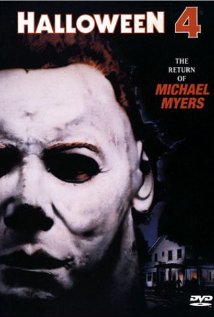 In 1982, Halloween 3 ticked off a lot of people expecting to see Michael Myers and his Captain Kirk mask chasing after Jamie Lee Curtis. In truth, Halloween III was a good little movie, but the angry audience was expecting the boogeyman.

By the time Halloween 4, The Return of Michael Myers (1988) was released, it had been nearly seven years since Michael Myers haunted the silver screen. Moustapha Akkad wasn’t about to let the world forget about his icon, and so the most famous slasher movie series was revived.

The story begins with Michael Myers being transported to an alternate asylum one night before Halloween.

This is almost exactly what went down in the original Halloween, and you would think by now that an asylum would not let Myers anywhere near the outdoors with pumpkins in season. And I won’t even ask the movie to explain to me what happened between Halloween 2 (1981) and Halloween 4, remembering Halloween 2 ended with Myers burning to death. Needless to say, Halloween 4 begins as Myers escapes into the night, heading straight for Haddonfield.

Jamie Lloyd, played by now-horror icon, Danielle Harris, is Laurie Strode’s daughter, adopted by the Carruthers family. Laurie and her husband apparently died eleven months ago, which is interesting since Laurie eventually returned to the Halloween series, alive and well. And yes, future movies tried to explain her return when it happened, but oh, what a hot mess…

Jamie lives a crappy existence. Rachel, her sister via the adoption, is a little cold at times. “I know you miss your parents. It hasn’t been that long.” Yet she seems to mean well. The students at Jamie’s school are another story, however. They taunt her relentlessly. “Jamie’s an orphan!” Okay, I’ve witnessed some pretty horrible bullying in school, but this is a little hard to believe. 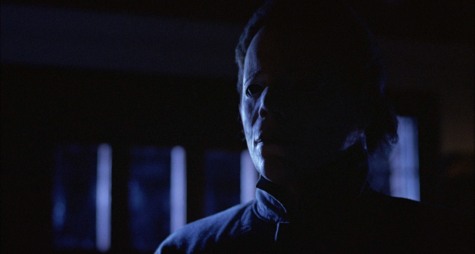 You might think from the path this review has thus far taken that I am going to blast Halloween IV. Actually, the movie survives its premature death (much like Myers in so many movies) and turns out to be a decent horror flick. Donald Pleasance returns as Dr. Loomis, and this alone is worth the price of admission. Pleasance’s Loomis portrayals are always cinema gold. (Hey, wait a minute. Didn’t Loomis burn to death at the end of Halloween 2, too?)

Back to Myers. You might remember he escaped the night before Halloween…again. This time, the police actually listen to Loomis and decide to enforce a curfew on Halloween night. They also bring Jamie and Rachel to the sheriff’s house for added protection. Myers learns of this location through his cunning boogeyman ways and sets off after little Jamie.

The ensuing stalk and murder scenes are pretty good, and some of the scenes inside the sheriff’s house are downright creepy. If you’ve stayed with the movie to this point, the payoff is decent enough to make it worth your while. The chase scenes through the house are solid slasher fare, and the dark interior is well shot.

The swerve ending is pretty disturbing, too.

Overall, Halloween 4 is a decent enough slasher. It pales in comparison to Halloween II and doesn’t deserve to be mentioned in the same breath as the original, but I like it better than some of the truly horrible sequels which later arrived. I know that isn’t much of an endorsement –  I’m ambivalent on Halloween 4. But there are far worse horror movies from the 1980s which get far more respect. You also get an early look at Danielle Harris, who is probably my favorite modern day horror actress.

Creepy at times, Halloween 4 overcomes a clunky plot to deliver a decent slasher movie, worthy of some popcorn munching fun. You can purchase Halloween 4  on DVD from Amazon.