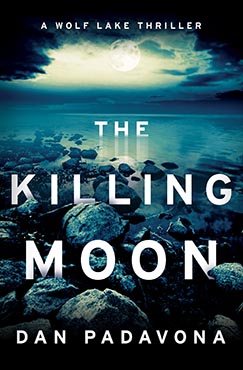 Dan Padavona’s new psychological thriller, The Killing Moon, is live on Amazon, and readers are buzzing about the fourth entry in the Wolf Lake suspense series.

The Killing Moon provides an exciting blend of crime thriller suspense with old school horror, reminiscent of early John Carpenter movies like Halloween. In fact, The Killing Moon seems the like the perfect read for Halloween night, combining a robust mystery with drive-in horror movie chills.

Only twelve hours have passed since Violet saw her teenage boyfriend. Now his body lies in the morgue, riddled with stab wounds. And the evidence points to a mythical serial killer Violet invented to scare her friends…The Halloween Man.

Sheriff Thomas Shepherd is torn between two investigations after a deadly inmate escapes prison and stalks Wolf Lake. How can he defend his loved ones while a murderer runs loose?

Desperate to catch the killer, Thomas pursues Violet and her friends. But as he wades into the investigation, the suspect list grows.

Is a madman copying scenes from a horror movie on Halloween? Or is Violet hiding a deadly secret?

Need to catch up on Wolf Lake? View the entire psychological thriller series on Amazon.