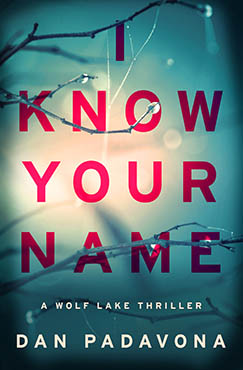 There’s a new chilling thriller in the hot selling Wolf Lake series by Dan Padavona. I Know Your Name (book five in the Wolf Lake thriller series) released on Kindle and paperback, with the audiobook coming in early October.

When a criminal defense attorney is stabbed in her home, the police name her disturbed son, Shawn, their top suspect. But no one can find Shawn.

In a last-ditch effort to locate his son, Shawn’s father convinces PI Raven Hopkins to take the case and prove his son’s innocence. When Sheriff Thomas Shepherd takes over the investigation, the evidence against Shawn mounts.

As hope of saving Shawn dwindles, another dead body surfaces. The victim’s shocking link to the criminal defense attorney wreaks havoc on the case. Thomas and Raven fear the worst…that they’ve walked in the killer’s shadow since the investigation began.

Unable to trust anyone, can the investigators find Shawn before the killer does?

I Know Your Name continues the heart-pounding pace that mystery and thriller readers love. The paperback and Kindle e-book are available from Amazon today.

Need to catch up on Wolf Lake? View the entire series on Amazon.

The Shadow Cell: A chilling psychological thriller
The Face of Midnight - Cover Art Reveal
The Girl Next Door - Jack Ketchum