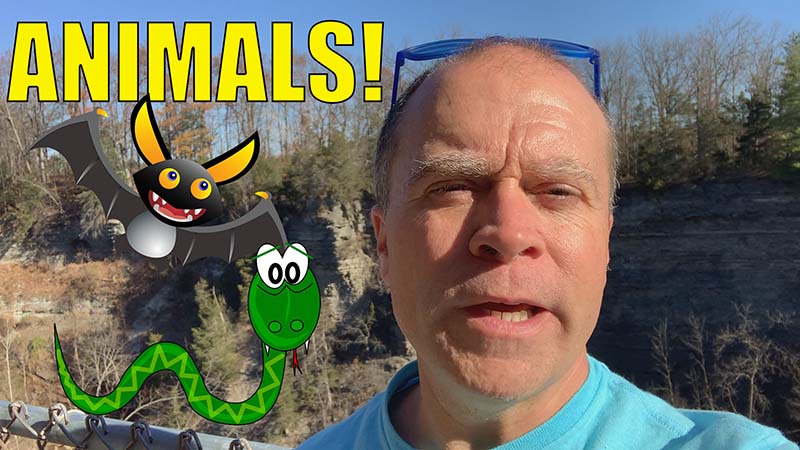 Questions from readers about my thriller books

In today’s video, thriller and mystery books writer Dan Padavona, author of the bestselling Wolf Lake series, takes readers through Taughannock Falls near Ithaca, NY, and answers their questions. Topics include what Dan would be doing if he wasn’t a writer, and how he created the characters and storylines behind the terrifying Darkwater Cove series.

Enjoy the beautiful scenery as Dan hikes through one of New York’s most beautiful state parks.

Saundra Cox wants to know: Have I always wanted to write? And if I didn’t write, what would I be doing now?

So that’s a pretty easy question to answer. I’ll make it long winded as I always do. I grew up fascinated by weather, and I always wanted to see a tornado. I think that is something which was with me from the first time I saw The Wizard of Oz. I graduated, got a job with the National Weather Service, and worked there from 1994 until 2021. And I would still be working there were it not for this writing career, which I’ve been blessed with, and so many wonderful readers like Saundra.

I loved everything about my job: the people, the daily challenges. I couldn’t stand the shift work; it just took so much out of me. And I was writing at the same time, so it became very difficult to keep up with both. Writing eventually took off to the point where I was making a lot more from my books than I was from my job. So it became a no brainer and I walked away.

If you’re new to my name, or you have heard of me as a thriller author, but you’ve yet to check out one of my books and aren’t sure if they’re right for you, I have a 100% risk free way for you to check out my writings. What I want you to do is go to my website, DanPadavona.com. That’s DanPadavona.com. And click on Dead and Buried, my free thriller book, which is exclusively available through my website. This is the prequel to the Darkwater Cove series and you will not find it on Amazon, or anywhere else. You can download this book to your Kindle, your Nook, your favorite tablet, even to your phone. And if you’re really feeling adventurous, you can even print out the pages and read them right off your printer. This is a great way for you to check out my writings. So once again, go to my website, DanPadavona.com and click on your free copy of Dead and Buried.

Kim Dockery asks, how did I come up with the characters for Darkwater Cove?

I thought that if I had an expert female profiler with the Behavioral Analysis Unit through the FBI, and if she had been outsmarted by a really conniving serial killer, who almost took her life and now was obsessed with catching her and killing her, that that would be a very tense story arc to work off.

Darkwater Cove, from the minute in which I conceived it, was going to be a breakneck speed, page-turning, frightening thriller, which left you feeling vulnerable as you turned each page. And if you identify with Darcy, the best way (I thought) to make her vulnerable was to take away her support. So she’s left the FBI. She doesn’t have that support anymore. She took her early retirement after she was almost killed. She doesn’t have a husband at home because he died at an early age tragically. And she’s raising two teenagers, one boy, one girl at very impressionable ages. So you know, anybody who’s gone through that knows that that’s a stressor on its own.

And the last step was creating the killer, and I wanted the killer to be very memorable, to differentiate himself from the Hannibal Lecter’s of the world. And I finally settled on the Full Moon killer, the serial killer who killed on or around the full moon. And, you know, that just conjures up all kinds of imagery from werewolves and vampires to classic horror.

Writing for a Living: A Day in the Life
Storberry - Kindle Countdown Sale
Hatchet (2006)