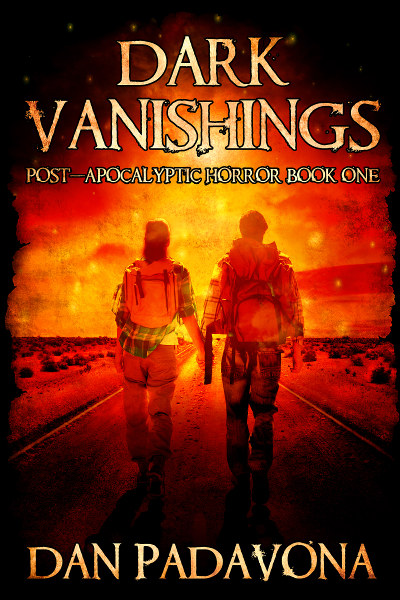 Dark Vanishings: Episode One is now available for pre-order through Amazon. The Kindle digital version is on sale for only 99 cents.

Dark Vanishings is a post-apocalyptic thriller and horror novel, focusing on a small group of people who awaken to find everyone they know has mysteriously disappeared. But they aren’t alone in the world. Something is stalking each of them through the darkness.

From the cover of Dark Vanishings I

What would you do if almost everyone on earth disappeared? Where would would you go? What choices would you make?

A teenage girl harboring a horrible secret flees across the country from a deranged stalker. A boy who discovers he was secretly adopted is pursued by a dark, cloaked figure through upstate New York.

A Florida man moves into a luxurious amusement park resort, where he meets a beautiful woman. But they are not alone in the resort.

A young man with an addiction to fast cars and absolute power clashes with a bounty hunter. A father and daughter search for each other in a lost world where rules no longer exist and danger lurks around every corner.

How would I describe Dark Vanishings? How about Dark Fantasy meets 80s Horror meets The Stand? A wild ride from start to finish, Dark Vanishings will get your heart pumping and pull you into a lost world.

The 99 cents sale won’t last long, so grab your copy of Dark Vanishings before the price goes up.