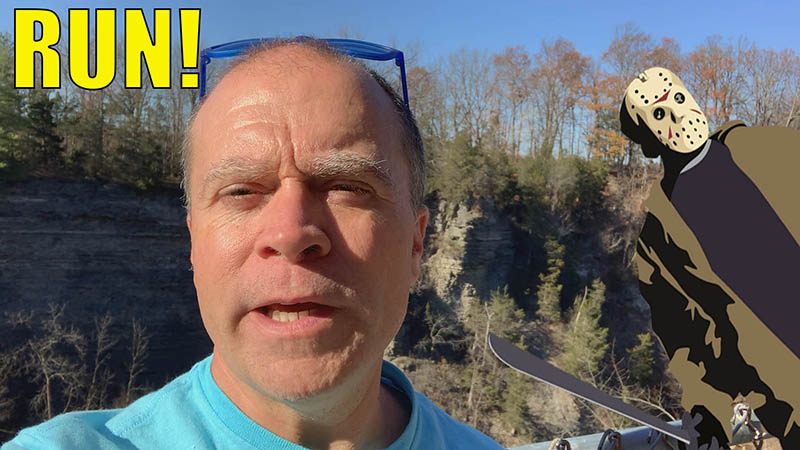 In this video, bestselling thriller and mystery books author Dan Padavona answers reader questions while hiking at Taughannock Falls State Park near Ithaca, NY. Topics include how Dan keeps track of characters and story arcs across his many thriller and mystery series, what inspires him to write serial killer thrillers, and how he plans each book. Does he use outlines, story beats, or does he write from the seat of his pants?

Enjoy this fun video recorded in the beautiful Finger Lakes.

This is Dan Padavona, author of the best selling Wolf Lake thriller series. And today I’m hanging out at Taughannock Falls, probably my favorite New York State Park. It was a huge inspiration for the Wolf Lake and Darkwater Cove series, and also for the upcoming Thomas Shepherd mystery series. And today I’m answering reader questions. So let’s get right to it.

So today’s first question comes from Grant Cook. And Grant wants to know, how do I keep track of all the different characters story arcs and locations, etc, in the series that I write? That’s a great question. And if he comes up with an answer, I hope he lets me know. But seriously, what I do is I just keep a Google doc that contains notes for each book that I’m writing at that moment. As far as story arcs go, I usually don’t have to work to keep track of those. And the reason for that is I can usually just know what is happening in everybody’s lives because I focus on one series at a time.

Another hack is to not create too many important characters in any series. First of all, it’s difficult for the reader who may not be exclusively reading my books; I’m certain that they are.  Raven’s brother LeVar Hopkins is also an easy character to remember. Because LeVar you know, is nothing like anything other characters in the books. LeVar is, depending on which book you’re reading is either 18, 19 years old, tattooed, muscular, former gang member who turned his life around, dreadlocked. So, you know, he’s obviously very different from say, Thomas Sheperd, who is a sheriff who overcame Asperger’s syndrome and has difficulty expressing himself.

So the characters themselves are easy to write and easy to remember. And that is definitely an important tip for anybody who wants to write a book. Make sure that your readers can tell the characters apart. And that’s allowed me to get away with a few different characters or a few more characters than I normally would recommend that people put in their books.

David Morford asks, what motivates me to write? There’s another good question, and you may recognize Mr. Morford as the mysterious Dr. Morford, who appears in The Scarlett Bell series. In fact, he is the psychiatrist who Scarlett Bell sees. He does not eat anybody like Hannibal Lecter . . . yet. So you know, we’ll see what future incarnations hold. So let’s get down to that.

Boy, since I was a kid, I always wanted to create. I did write short stories. During high school, one or two of them ended up being featured, I think, in the school newspapers, something like that. It escapes me; it’s been a long time. I’m 54 now, but I did not embrace writing truly until I turned 46 in 2014. The book, which I think, put me over the edge, and made me really wanted to create was a book called of the Name of the Wind, by Patrick Rothfuss. It is the first book in the Kingkiller series. And I loved it. It is so brilliantly written; the prose is perfect. The storytelling is perfect. The pace is wonderful, and leaves you wanting more. As far as Patrick Rothfuss goes, I don’t read him any more. He only made two books in that series. He never did release the third and has been talking about the third I think now for over a decade and I’m tired of waiting. Everybody is.

You need an extra motivation to get yourself to do the hard work to come up with a story and this comes down to, in my opinion, finding your why. Now, this is something which has been popularized by a lot of self-help professionals, coaches–finding your why in anything that you do. If you know why you’re doing it, if there’s something important, which is dragging you forward, that will motivate you more. And you can use that for creativity as well. I use it for writing. So I always look at my children, my son, Joe, my daughter, Julia, and of course my wife. I have an obligation to them. I need to produce quality books, to always be there financially for them.

If you’re new to my name, or you have heard of me as a thriller author, but you’ve yet to check out one of my books and aren’t sure if they’re right for you, I have a 100% risk free way for you to check out my writings. What I want you to do is go to my website, DanPadavona.com. That’s DanPadavona.com. And click on Dead and Buried, my free thriller book, which is exclusively available through my website. This is the prequel to the Darkwater Cove series and you will not find it on Amazon, or anywhere else. You can download this book to your Kindle, your Nook, your favorite tablet, even to your phone. And if you’re really feeling adventurous, you can even print out the pages and read them right off your printer. This is a great way for you to check out my writings. So once again, go to my website, DanPadavona.com and click on your free copy of Dead and Buried.

Tom Duffy asks, How do I plan each book? Do I right from the seat of my pants? Which means am I creating the story on the fly as I write it? Or am I a heavy outliner? And the answer is that I fall somewhere in between. I used to utilize the technique, which a lot of authors refer to as story beats. Everybody, I think, does story beats a little bit differently. I write about four or five sentences. So like a short paragraph, which explains each chapter. This keeps me organized. There is a mystery component to a lot of my stories so that clues are placed. And if I can’t keep track of those clues, I’m gonna mix some important things up. I believe that story beats also keep me writing every day.

The first reason that writers procrastinate is fear. Fear that you won’t know what to write or what you write won’t be very good. If you have a plan in place, and you know every single day what you are writing, that excuse goes away. And it’s probably the biggest step which I took from going from an unknown writer to a very prolific writer with a best selling series.

Look at this beautiful, amazing scenery. This is Taughannock Falls in upstate New York. This is part of the Finger Lakes region, and just outside of Trumansburg and Ithaca. Now icebergs formed these crazy gorges, and when those icebergs melted, they formed the Finger Lakes. The scenery greatly inspired the many locations I write about in my novels, especially the Wolf Lake and Thomas Shepherd mystery series. If you want to see it for yourself, come on out. We’d love to have you. Taughannock Falls is just outside of Trumansburg and a stone’s throw from the city of Ithaca.