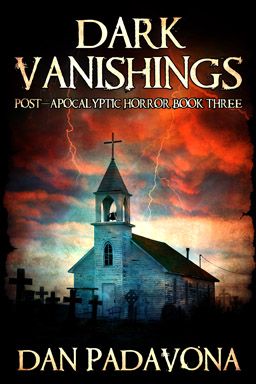 Great news – a new post-apocalyptic book is out from Dan Padavona, the author of Stoberry!

The third episode in the post-apocalyptic horror/adventure series, Dark Vanishings, is available on Amazon in paperback and for Kindle e-readers. Kindle Unlimited and Amazon Prime members can read any of the Dark Vanishings books for free!

The third book sees most of the main characters converge on one another, as friends or as allies. Tori must learn to emotionally and physically deal with her powers, while Blake becomes increasingly protective of her.

Ricky accelerates his pursuit of Amy, but Amy and Keeshana aren’t running anymore and have their own plans to turn the tables on him.

All the while, an evil older than time creeps down from the north. And he isn’t coming alone.

“As is the case with all of the Dark Vanishings series entries, the third episode combines horror with adventure and dark fantasy to create a unique and enjoyable storyline. The feedback for all of the Dark Vanishings episodes has been excellent so far, and I am so happy that readers are enjoying the books. I believe the third episode is the best yet.”

With the key players closing in on an eventual cataclysmic showdown, the tension ratchets up in Dark Vanishings Three.

“You have Lupan mobilizing his forces as Tori learns more about her power and needs to make a choice – does she accept her gift? We also get to know a little more about the characters, and some of the revelations will surprise readers.”

Get your copy of Dark Vanishings Episode Three today, and let me know what you think!