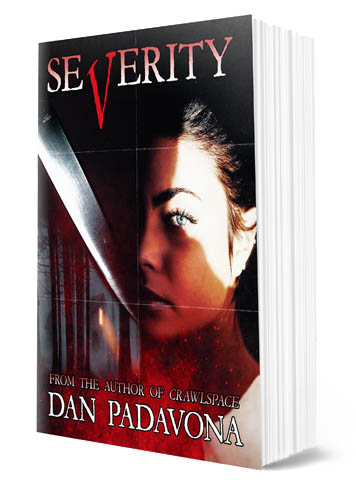 Edited by horror author, Chad Lutzke, Severity is slick and knife-edged, delivering an experience readers compare to Sleeping With The Enemy and Silence of the Lambs.

Padavona says of the new novel, “My last two novels were heavy on dark horror, with an emphasis on slash and stalk. Severity plays more like a dark thriller novel, though I included creepy horror elements throughout.”

“I’m a huge fan of Chad’s work,” says Padavona. “Of Foster Homes and Flies was the best coming of age horror story I’ve read in years, so strong that it even got Jack Ketchum’s attention. I consider Chad a friend, a great horror mind who has supported my work since I released Storberry in 2014. The opportunity to work with Chad was one I couldn’t pass up.”

It wasn’t all blue skies and sunshine. Padavona said Lutzke was brutally honest with his editing suggestions.

“The man is dangerous with a red pen,” Padavona said, laughing. “But that’s exactly what I was looking for. God knows I tend to wander when I write, and Chad kept me focused. The final manuscript for Severity was my strongest work yet, a story I’m proud to put my name to.”

On reaching the Amazon Hot New Releases chart in United States Horror, Padavona says he was overwhelmed by the public reaction.

“Sometimes the work gets very lonely as an author. I’m constantly writing in a vacuum and nobody sees my work until the very end. It’s easy to get paranoid and start questioning if my fans will love or hate the new book. That’s why it’s so important to have a strong editor. It would be an understatement to say I breathed a sigh of relief when Severity achieved early success.”

From the Severity description:

Somebody wants to kill her.

Marissa tries to catch her adulterer husband cheating, but someone is stalking her.

After a series of bloody murders follow Marissa, she doesn’t know who to trust. Now she must stay ahead of a bloodthirsty serial killer to discover the horrible truth about her marriage.

If she fails, she dies.